The prickly-ash is a colony-forming small tree or shrub. In spite of the name, it is not related to the ash species and is actually a part of the olive family. The twigs are brown and smooth with young shoots light green and pubescent. The twigs and stems are covered in 1/2 inch prickles making them difficult to use in a landscape. The leaves are dark green in an alternate arrangement with compound leaves that are about 6-12 inches long. They have finely serrated edges with a yellow gland between each tooth. When the leaves are crushed, they have a citrus smell to them. Male and female flowers are on separate plants. The yellowish-green flowers appear before the leaves on last season's twigs. The flowers give way to a small red 2-valved capsule with a shiny black seed.

Prickly-ash is limited and difficult to use as an ornamental due to the spines on the plant. It is good for hedgerows, screens, naturalized woodland areas or integrated into native plantings. In drier sites, it is located on rocky slopes.

Butterflies are attracted to the flowers and birds use the tree for shelter.  Prickly-ash is a food plant for larvae of the giant swallowtail butterfly.

There are no serious issues or problems.

It is sometimes commonly called a toothache tree because Indigenous tribes of North America would chew on the bark or fruits, which produces a numbing effect, for relief from toothache pain. 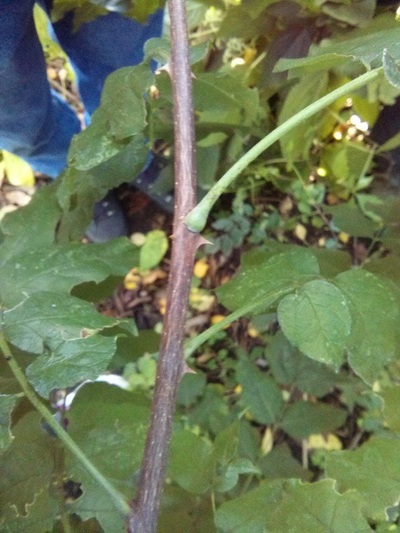