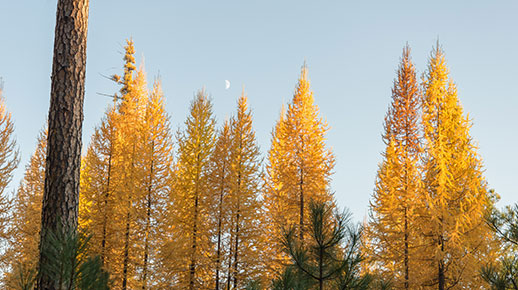 Eastern larch (Larix laricina), also commonly known as tamarack, is a prolific deciduous conifer during fall. This tree is a great example to break the stereotype that all conifers never lose their leaves! It’s soft light blue-green needles turn in a gorgeous golden yellow in the fall before dropping. The needles like to grow in clusters on spur shoots and also scattered spirally on leader twigs. Eastern Larch can grow anywhere from 40 to 80 feet in height with a straight, tapering trunk. The cones on this tree are the smallest out of all the larches, being ½ to ¾ of an inch tall. The cones also have a deep maroon color to them, so if having pretty yellow needles in the fall wasn’t a good enough reason to love their beauty here’s another reason. 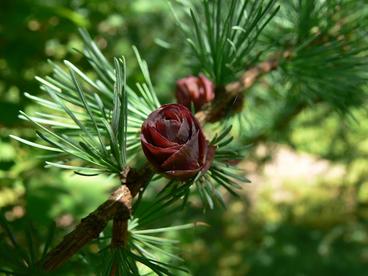 Eastern larch is a beautiful ornamental tree as well as in their native habitat. They can be seen in hardwood forests alongside maple trees in the fall, making falls colors that much more enjoyable. Besides being found in dry upland soils, eastern larch also likes to grow in wet peaty soils such as bogs and swamps alongside black spruce. Its native range covers the majority of eastern Canada and as far as the northwest territories in Canada. It can also be found in Alaska and much of the northeast United States, going as far west and south as the Great Lake states to northern Minnesota. 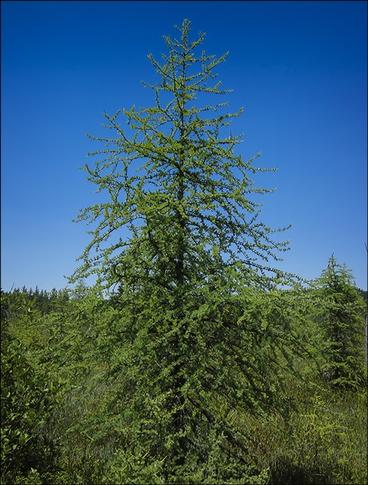 This conifer is a very useful hardwood with a long history. Indigenous people used the slender roots of the tree to essentially sew together strips of birch bark for their canoes. Colonists also used the roots as “knees” in their small boats, saving them from a laborious process of making the boat’s ribs. Eastern larch wood is also used for a variety of commercial and construction uses from lumber for houses, poles, railroad cross-ties, furniture, and pulpwood due to its decay-resistant nature. It is susceptible to the eastern larch beetle and larch sawfly, which both can cause damage or death to the tree.