Berry Poppins® is a dwarf-sized winterberry compared to other winterberry hollies. It is a multi-stemmed shrub with smooth light gray bark. Insignificant greenish-white flowers bloom late spring or early summer that are then followed by showy bright red berries in the winter. The berries last throughout winter, lending interest after the growing season. The leaves are elliptical in shape with finely serrated margins and are dark green in the summer. This is a dioecious shrub, so for the best berry production buy a male winterberry, such as Mr. Poppins™. Mr. Poppins™ can pollinate up to 5 Berry Poppins® or other winterberries that are within 50’ of the shrub.

The plant can grow in well-drained moist acidic soils, as well as poorly drained soils and boggy conditions. It does poorly in neutral or alkaline soils and often dies in these soil conditions. The plant loves full sun but can grow in areas that are partly shaded as well. This winterberry is also deer-resistant.

Berry Poppins® winterberry is perfect for home landscapes that need an extra pop of color during the winter months. The plant is also tolerant of road salt, so Berry Poppins® is a great option if looking for a shrub that brings a pop of color to the front of your house. It can also be planted along the edges of streams or ponds. The shrub requires very little to no pruning. Excessive pruning can decrease flower and fruit production. Branches with berries can be cut off to add to flower arrangements. Older, less vigorous branches that are not producing fruit anymore can be pruned off in the spring. Regular watering will help with keeping the soil moist around the plant.

Birds are attracted to the berries and are used as a food source.

This shrub is native to North America and will grow in most climates of the United States.

The berries of Ilex can be toxic to pets, so pay attention to your four-legged friends when outside. There are no other known issues or diseases that affect Berry Poppins®. 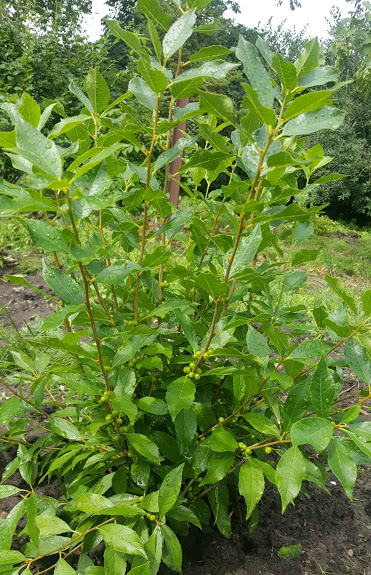