Amelanchier x grandiflora is a hybrid cross between two species of serviceberries, A. arborea (downy serviceberry) and A. laevis (Allegheny serviceberry).  This deciduous, multi-stemmed shrub or small tree normally reaches about 20 feet tall. Leaves are simple in an alternate arrangement and have an ovate shape. They are blue-green in the summer and turn yellow to orange in the fall. Bark on serviceberry is silvery gray and smooth, developing fissures with age. In spring, this species displays small pinkish-white 5-petaled flowers that usually bloom sometime in April. The fruit is produced once the flowers are gone, turning blue-black when ripe in June.

This shrub is tolerant of most site and soil conditions but does not tolerate soil salt or poor drainage. It can grow in full sun and partial sun/shade. It is susceptible to heat and drought stress.

The shrub itself can be planted in residential and parks, city parkways, and under utility lines. It can also be planted near patios and sidewalks. The shrub is shallow-rooted so adding a layer of mulch around it will help conserve moisture and moderate soil temperature. The fruit is edible to humans and has a similar taste to blueberries. They can be eaten raw or used in jellies, jams, and pies.

Birds are attracted to the fruit and used as a food source.

Where it's Native to:

This shrub can be found growing in the eastern United States and Canada. 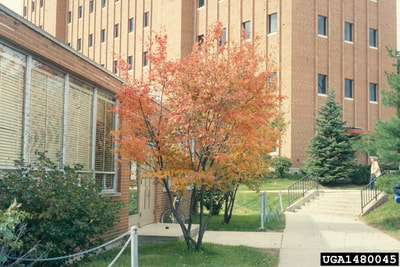