The American elm was widely planted throughout the United States and in the 1960s came under attack from Dutch Elm Disease (DED). Millions of these trees were lost due to DED. American elms can still be found in urban landscapes, but unfortunately, they are no longer recommended for planting. These elms are large and very broad shade trees. The leaves are a deep green color that turns yellow in the fall and have double serrated margins, are oval in shape, and can be rough-textured. The leaves are unequal at the base of the leaf, meaning one side is lower than the other side of the central leaf vein. Flowers bloom in early spring but are not clearly visible. Elms produced a small seed in a winged samara for wind dispersal (Morton Arboretum). The bark is a light gray color and becomes deeply furrowed with scaly ridges as it matures. The twigs are slender and brown in color (Little).

American elms do well in moist well-drained soils and can be found in mixed hardwood forests (Little). It was a popular urban landscape tree due to its tolerance for alkaline soils, clay soils, road salt, air pollution, and dry conditions (Morton Arboretum). They also thrive best in full-sun areas.

American elms that are still around are a great shade trees and are still used as a street trees. Other varieties of elm are also being introduced to be used as urban landscape trees. The wood can also be used for furniture and paneling (Little).

The American elms' native range is mainly the eastern half of the US. It reaches from Maine down to Florida. Its range stops just before the Rocky Mountains and reaches down to the Gulf of Mexico (Little).

There are now disease-resistant varieties being introduced to the market, but we recommend exercising caution when planting these and not to over-plant. The new varieties have been found to grow very fast and need a considerable amount of care and pruning when young. Included are descriptions, written by Chad Giblin, of some of the new varieties that are commercially available. This includes hybrid varieties as well.

1) Accolade Elm
This Morton Arboretum introduction has been a great selection for many years. This tree has a mature form that is similar to the American elm but is slightly more upright and a bit smaller. Accolade™ has shown excellent performance in winter hardiness tests in the Twin Cities area and generally outperforms many other varieties in terms of insect resistance as well.  In 2004 we discovered two Accolade™ elms that had Dutch elm disease.  While this is disconcerting, it was a good reminder of what the term resistant means; none of these selections are immune to DED. One of the two trees, currently under observation at the U of MN, currently has no symptoms of the disease and continues to grow with incredible vigor!

2) New Horizon Elm
The New Horizon elm is a product of a cross between U. pumila and U. japonica and is an introduction from the University of Wisconsin-Madison. It has many of the desirable features required for growth in the urban forest: fast growth, good insect resistance, and good DED resistance. In some cases, co-dominant leaders and heavy side-branches can develop quickly on this variety, so higher levels of maintenance are required, especially in young trees. Like the Homestead elm, New Horizon appears to be favored by elm leaf beetle and has shown moderate feeding in our research plots.

3) Princeton Elm
Princeton is a true American elm that was actually selected for “superior horticultural qualities” prior to the DED epidemic (Stennes, 2003). This tree is slightly more upright than many of the seedling American elms around and it is this habit that requires much more attention to pruning during formative years as side branches develop quickly and may become included or dysfunctional very quickly.  Outbreaks of Japanese beetles will result in heavy feeding on most young American elms, including Princeton and Valley Forge. The long-term effects of this feeding are currently unknown for our region.  Other areas in the USA report recovery after a new flush of foliage. Princeton is not patented and can be legally propagated by anyone!  In propagation studies at the U of MN, this tree is quite easy to clone using summer softwood cuttings. This tree received a lot of press coverage in 2007 and since has seen wider availability at a major home-improvement store locally.  Like most American elms, young Princeton elms will require a heavy dose of structural pruning to establish good form.

4) St. Croix elm
Selected from a massive parent tree in Afton, MN, the ‘St. Croix’ American elm joins the ranks of Dutch elm disease-tolerant elms with a Minnesota twist. Since its discovery by U of M alumnus Mark Stennes, researchers in the Departments of Plant Pathology and Forest Resources have cloned and screened the tree for Dutch elm disease tolerance. Young specimens grow at an incredible pace and have gracefully arching branches and dark green leaves. Like all American elms, ‘St. Croix’ can thrive in tough environmental conditions.

5) Triumph Elm
Triumph™ is another new selection out of the Morton Arboretum in Illinois. Its parentage includes Vanguard™ and Accolade™. If you are looking for a tree with larger leaves than Accolade™, this might be the one!  It has been relatively carefree in the nursery setting and has all the qualities of Accolade™ without many of the drawbacks like branch inclusion, breakage, and so forth. However, it is reported to have less resistance to foliage feeders like the elm leaf beetle. This selection has also shown excellent performance on brownfield sites. Several have been growing in some of the worst sites in Minneapolis and Saint Paul for over ten years and show great promise for tough urban sites!

6) Valley Forge Elm
Valley Forge is a true American elm introduction from U.S. National Arboretum with outstanding DED resistance. This tree has a lot of well-earned notoriety for being hard to manage in the nursery and as a young tree in the landscape! Once it gets into larger stem caliper ranges it seems to “settle down” a little and take on a more manageable form and habit. If you are interested in trying this tree, be ready to devote enough time to pruning it for long-term health and branch structure. Young Valley Forge (less than 10in DBH) should be pruned at least every two years for the first 10 to 12 years. It is reported to be 96% resistant to DED in inoculation studies and appears to be fully hardy in USDA Hardiness Zone 4. Also note susceptibility to Japanese beetle feeding, noted above under Princeton.

Dutch Elm Disease has been the most damaging agent to American Elm. DED is a fungus that was introduced around 1930 that was spread by elm bark beetles (Little). Due to the fact that American elms were planted so closely in urban environments, it made it easy for the fungus to spread through their grafted root systems and by the beetles (Morton Arboretum). The disease attacks the water-conducting tissue of the tree causing wilting, defoliation, and eventually death (Missouri Botanical Garden).

American elm is also susceptible to phloem necrosis, which is a disease that attacks the food-conducting tissue of the tree, causing the bark to loosen, wilting, defoliation, and eventually death (Missouri Botanical Garden).

Wetwood is a bacterial disease that causes wilting and dieback in the tree (Missouri Botanical Garden).

Various wilts, rots, and cankers can also occur. Insects such as elm beetles, borers, mealy bugs, and scale can also be an issue (Missouri Botanical Garden). 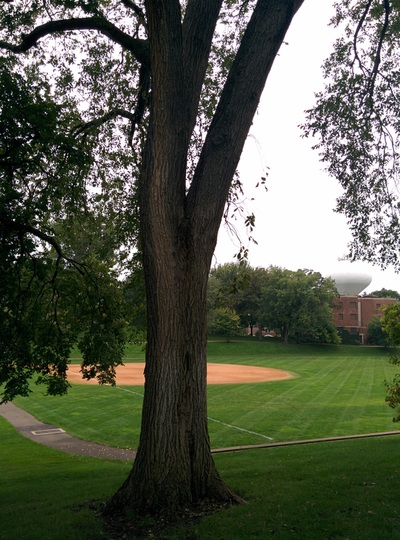 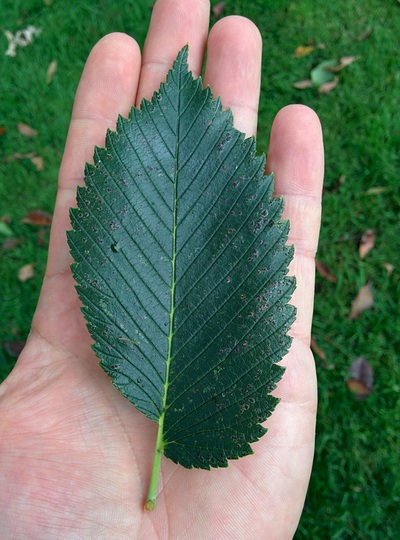 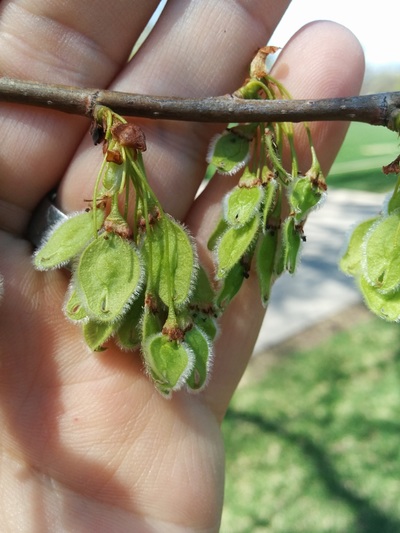 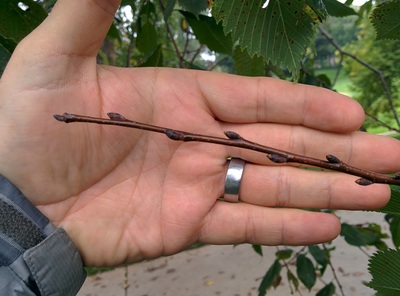